The Hanging Gardens of Babylon masterfully blends the serenity of ancient artwork with stunning virtual architecture.

Creator Patch Thibaud is actually an architect in the physical world as well, and his years of experience inform every detail of this majestic locale. After observing some work on Patch’s Flickr, Resident Crista reached out to him to build a region for her. Of the request, Patch says, “I agreed to participate as long as I got to do The Hanging Gardens of Babylon, which was an ideal subject; an evocative and romantic concept, monumental in scale - and nobody has any idea what the original looked like, if in fact it existed at all.”

Patch’s affinity for building in the metaverse is strengthened by the fact that “there is no one in between me and the final result; I don't have to deal with contractors, estimators, building codes, etc.,” and yet there are limitless possibilities. Furthermore, Patch feels that “in all 3D modeling software I am familiar with, you are working in an abstract, gridded space. In SL I am used to working outdoors, with a beautiful sky and perhaps with beautiful water, and the context of an entire world.”

The concept of storytelling has been incorporated into many visual art forms, and as a trained designer, Patch adopted an episodic approach to the immense project. Patch created an extensive history for the estate: “This build imagines a structure originally built in mud brick by the Assyrians; later seized and rebuilt in stone by the Romans; {eventually} acquired by a cardinal during the military struggles of Renaissance Italy, who rebuilt the temple complex at the summit to include a villa for him and pleasure gardens and pavilions; subsequent alterations and additions by the cardinal’s family, including the ballroom and the Moroccan Garden; and finally the current owner, who restored the whole structure and its gardens, and inserted a gallery for art, built in the modern style.”

Crista is also a longtime Resident, having started her inworld adventures 14 years ago. For Crista, Second Life is “a part of myself… part of my life and {it has} taught me many things that made me what I am now, in RL and SL. I am one person living in two different worlds. A wonderful SL can make a better RL. The Gardens were my SL dream for years… A ton of thanks to Patch Thibaud, I am not sure if we have a better builder. Sharing the beauty he makes, {as well as the} sensations and feelings deriving from it, is the biggest pleasure and satisfaction in this world.” 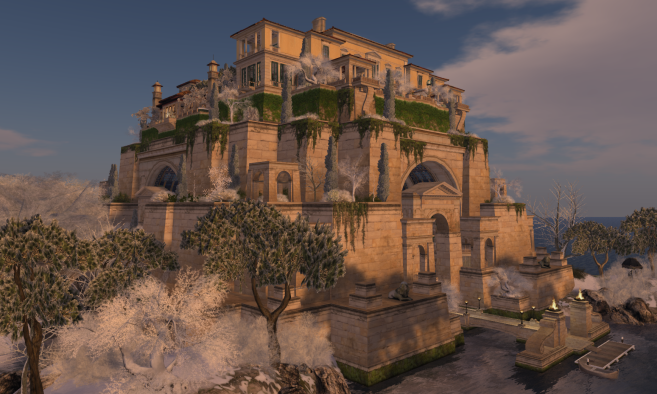 The Hanging Gardens of Babylon

The Hanging Gardens of Babylon is an amazing estate filled with magical places that will amaze you. Created by Patch Thibaud and adapted as a residence, this is a true work of art. Majestic beyond words, you must experience this to fully appreciate it! Let the gondola guide you to your arrival then explore this awesome creation.