Go back in time by visiting Shadezar, a fantasy roleplaying region inspired by the Mediterranean and Middle East.

A notecard given by creator Hera/Zee9 at the region’s entrance reads: “You may ask: Why am I in an attic, in a nursery? For as long as I can remember I have wanted to do a Neverland for adults. I even came up with a name for it, Neverworld X…” This starting point emphasizes the experience of being transported to a fantasy world, and has teleports to Vanesha, also referred to as Neverworld X, and Shadezar. You are instantly taken to a world of domed buildings and colorful tilework, surrounded by sand and sea that exudes a timeless sense of romance.

Shadezar is fantasy, sword and sorcery roleplay. It bears intricate recreations of architectural styles from different points in history such as Roman Antiquity and Ancient Persia. A notecard gives the following as story background: “This is the age of Iron, called the Formorian Age. There is only one great land mass called Gargantua, split into 5 main regions. The burning deserts of Samhara are located in the midlands. Shadezar  is the largest City in the Samhara Desert. Built upon a rocky outcrop, on a small island that splits the great Namhar river,  before it flows into the Sarazin Sea.”

The atmosphere of Shadezar is built upon respect for the thematic elements and roleplay experience. Please check out notecards from Hera for rules on the dress code and what type of weapons are allowed so that Residents can seamlessly engage with others and have fun. There is also information on the types of characters available (priests, merchants, beggars, etc.)  for those who are new. This exact location within the region has more information on the roleplay: http://maps.secondlife.com/secondlife/Cloud%20Lake/90/116/22

Hera has built and taken down many places in SL over the years; Shadezar is the result of combining old memories of virtual creations into one grand location. 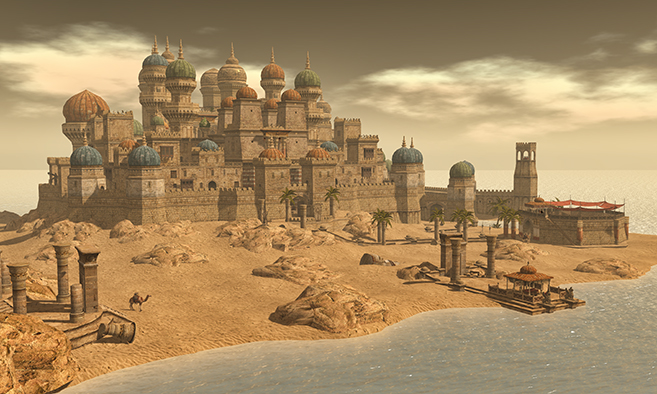 Ride a camel down the Silk Road and enter the desert kingdom. Come to dance and enjoy this fantasy role-play destination full of gladiators and magical djinn.