This week we are taking a stroll through Craggy Island, a peaceful and picturesque island off the coast of Ireland.

Created by Mishi Masala and Zucker Zabelin, Craggy Island in Second Life is not intended to be an ‘actual’ depiction of the fictional island that featured in the Channel 4 British sitcom Father Ted, but instead it draws more inspiration from the rugged landscape of the west coast of Ireland.

As creator Zucker Zabelin tells us, "its fields and rocky outcrops (the ‘crags’ that make the island ‘craggy’) are dotted with occasional weather-beaten ruins of stone walls.” Zucker tried to visualize a harsh climate with spartan living conditions which have driven away most of the former inhabitants of Craggy Island. “It is now mostly populated by farm animals and the few hardy souls that still live there,” he says, “braving the elements and eking out a precarious living.”

Mishi Masala and Zucker Zabelin also added a lighthouse, which warns passing ships to steer clear of the dangerous coastline. “The shipwreck off Craggy Island attests to the perils awaiting any vessels that may foolishly venture too close to the coast, “Zucker continues, “but for all of that, Craggy Island is blessed with spectacular photogenic views - and of course the Craic.”

There you have it. Now enjoy a quiet stroll through Craggy Island, and if you snap some images, share them in their Flickr group. 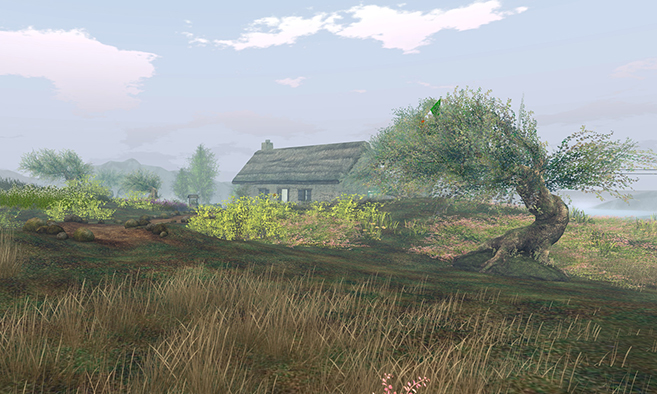 A peaceful and picturesque island off the coast of Ireland. Come to explore, come to unwind, come for the craic! Céad míle fáilte.