This week we are transported to Silent Night, a glittering winter park available until January 10th.

Creator Nessa Nova of Unicorn Landscaping became a Resident about nine years ago and says that shortly after, “I rented a parcel and taught myself how to terraform. It is now my main business in Second Life.” As you wander from section to section, it is clear that a skilled hand created Silent Night, as it feels like a portrait of winter’s tranquility. Among the natural cycle of the seasons, winter is often seen as symbolizing the absence of life, but Silent Night is a reminder that stillness can be an opportunity to observe the vibrance around you.

This brumal landscape is the latest of Nova’s many creations in SL. It feels like a movie set, with visitors starting at a train station before following a path through the snow and glowing trees to a cafe, an ice skating rink, a carousel, and more. The atmosphere feels at once unique and familiar, like a communal reverie. Of her aptitude for creation, Nova informs us that “Coming from a family of painters and artists, the love of art is in my blood. Though instead of using an easel, paint and a brush, Second Life’s digital world is my atelier, and a [region] is my canvas. I start with an idea, a picture in my head, a colour or a feeling. Sometimes I progress as I go, but most of the time the world I intend to create already exists in my mind and I can mentally walk through it when I envision it.”

Nova explains that Silent Night, which is a satellite of the Lost Unicorn Group, is not just about celebrating the holidays but also “to remind us to remain hopeful in these dark times.” As a bonus level of interactivity, Nova adds: “Natalie Starlight, curator of the Lost Unicorn Gallery, is organizing a photography contest. Pictures of the Silent Night [region] can be submitted to the Lost Unicorn Flickr Gallery until January 3rd. After January 10th Silent Night will be gone forever. (Unless someone decides to buy the [region] as is.)”

This sounds like the perfect opportunity to show off all the free gifts you picked up at the Winter Shop & Hop. Throw on that new scarf and take in the wintry elegance of Silent Night before the snow melts! 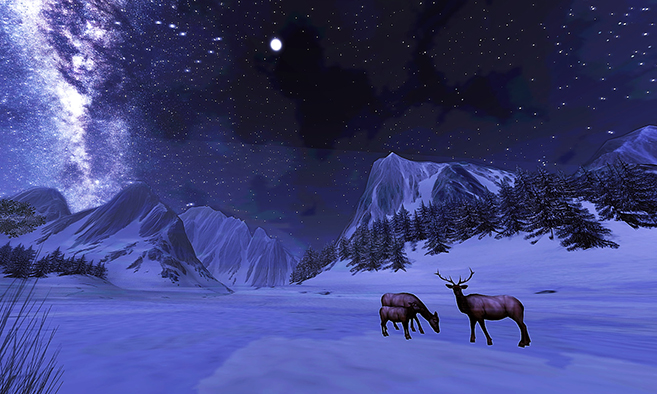 Come visit Silent NIght by Lost Unicorn Landscaping, a winter region like no other! Made with great attention to detail, like every other Lost Unicorn region. Immerse yourself in this winter wonderland and celebrate Christmas with your loved ones!