“Funday” by Cica Ghost, a whimsical meditation imbued with childlike wonder, is open to visitors for one more week!

Cica Ghost is known in Second Life for making temporary creations akin to virtual art installations. While many parts of SL have been maintained for years, these transient regions are a great reason to log in regularly and explore, because you never know what you might miss.

Funday greets you with lighthearted old-timey jazz, which cements the feeling of being transported to a different time and place. One of the most visually striking elements of this region is the distorted sense of size. A cartoonish caterpillar the size of a school bus lounges in one of the large brick blocks. The aesthetic of the region is hard to categorize; it feels like a worn out schoolyard with sprinkles of farm life and bucolic peace. A cluster of brick boxes next to the caterpillar almost looks like an urban cat tree. Murals of children and animals offer trippy optical textures as your eyes comprehend a two-dimensional character in a three-dimensional space.

There is a hint of the adult fable throughout Cica’s work, a reminder that one is never too old to stop and play.

Some of Cica’s previous works that she is particularly proud of include Rust, a patchwork circus of metal gears, and Drawn Town, an immersive black and white illustration-themed neighborhood. Cica has been putting out a new installation every two or three months as of late, and while there are stylistic similarities due to her characteristic approach, color palette and tone are unpredictable. So much work goes into each build, support the visual artists and creators of SL by visiting today! 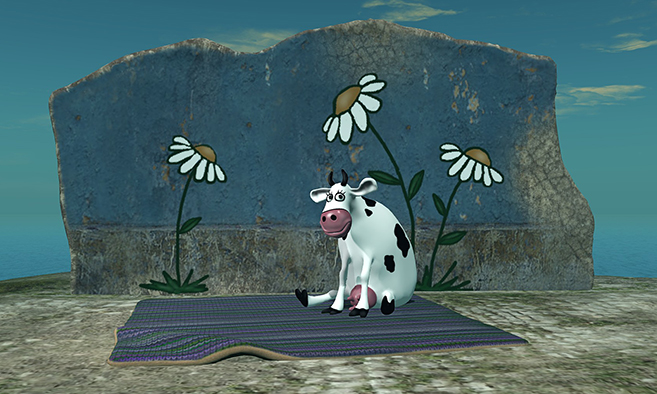