This week we are visiting Sommergewitter, a rustic German-language island that evokes the peace and beauty of a summer vacation home.

Created by SL and RL couple Seraph and Nida Nirvana, Sommergewitter is a German-language region composed of a rustic island. You can find a few farm animals wandering around and a few cozy homes in various corners. Seraph and Nida are one of the many Second Life love stories we are proud to share: they have both been Residents for over a decade and met in 2014. This eventually led to meeting up in the physical world and they are now in a long-distance relationship.

Seraph and Nida found that their familiarity with hanging out in a virtual realm was advantageous during the pandemic. They tell us “We spend our lives together in one or the other world, but we are together every day. The lockdown during the pandemic was no problem for us. Second Life has kept us close.”

Sommergewitter is based on a Hallig, which Seraph and Nida describe as “a type of small island typically found in the North Sea, and we structured it in such a way as if you were experiencing an oncoming summer storm as you settle into your vacation spot.”

Seraph and Nida built Sommergewitter in 2015, and it is of great sentimental importance to them. They explained to us that it has been maintained in its original form, like a moment frozen in time: “For about six years now we have tried to keep the region the way it was originally built. Mostly because that's where our relationship started but we also wanted to create a piece of continuity, something where people know their way around, even if they haven't been inworld for a long time.”

This power couple likes to keep busy. They also make machinima, such as Opera Ball in Vienna, and an ode to Tolkien's elven town of Rivendell is one of their latest projects. Kick off your summer vacation today by dancing in a summer thunderstorm at Sommergewitter. 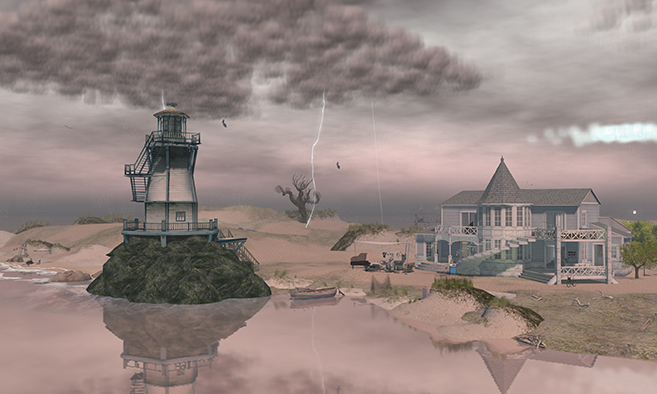 Sommergewitter is a German-language region that's been open since March 2015. It features a summer thunderstorm, as well as endless photographic opportunities.