This week we encourage you to get lost in the tall grass of The Far Away, a bucolic reverie that has been a special hideaway for Residents since 2007.

This charming and old-timey region was originally created as “The Wheatfield” by painter/photographer/coder Jeffrey Berg, who goes by AM Radio in Second Life. Shortly after, in an interview with Bettina Tizzy, AM explained that “I wanted to challenge people's idea of place. We have so many preconceptions of space. What is a sidewalk, what is a house, what is a trail, what is a cave? We've evolved our sense of space and place. What better place than SL to challenge it?”

His challenge was accepted; the soothing, yet thought-provoking atmosphere of The Wheatfield has been cherished by many Residents over the years. In fact, AM Radio and some other well-known SL artists were even mentioned in New York Times Magazine in 2009. Over the years, AM Radio has built 14 regions in SL, and many Residents have been inspired by his style. Strawberry Linden expressed her appreciation for his work in a blog post a few years before joining Linden Lab.

The region is now called “The Far Away,” and is hosted by the couple Ziki Questi and Kinnaird Fiachra on the region Dreamworld North, which is part of the Dreamworld estate owned by Count Burks. Ziki says she was drawn to it because, “to me, The Far Away is a seminal work of virtual art. Evocative and timeless, it laid the groundwork for other striking and more expansive works by AM Radio such as The Quiet and Surface, all of which now survive only in images and memory. Kinn and I are delighted to preserve and maintain The Far Away for the enjoyment of the SL community.”

Kinnaird recalls being brought here by a friend on her first day in SL: “I was not a gamer, and the whole concept of being inworld was a bit disorienting, but I remember my friend leaving me at The Far Away when he had to go AFK, saying, "you'll be safe here.””

The Far Away is a living virtual relic that has a peaceful ambiguity capable of meaning something different to every visitor. What will it mean to you? Visit today to find out. With hidden poses and interactive elements scattered throughout, who knows what your journey might lead to. 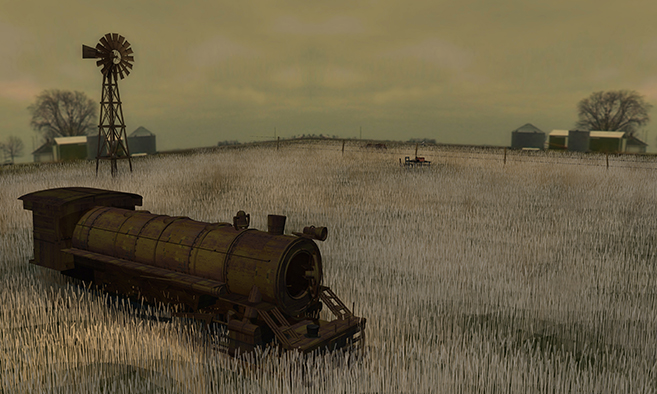 A blast from the past! Featured in The New York Times! The Far Away is an interactive 3D art installation in Second Life. First built in 2007 by AM Radio, now curated by Ziki Questi and Kinnaird Resident.