Grab your fur coat, this week we are traveling to Vargsången: a strikingly realistic medieval Viking land shrouded in an air of mystery.

Vargsången, Swedish for “wolf song,” is a quiet mountain village with a soundscape of native wildlife, strong winds, and the tide. While Camila Runo designed this region to be historically accurate, there are infusions of Norse mythology here and there. For example, Camila tells us that the “residential buildings show how people lived at the time: they slept on hay and furs, all together to share their body heat in winter months, for the same reason often close enough to their livestock such as sheep or pigs or whatever animals they owned.”

Camila would like to warn visitors about a large sea monster some have spotted circling the lands. “Rumor has it that it may be Jörmungandr, the Midgard Serpent. One of the god Loki's children, tossed into the great ocean by Odin, father of the gods.”

The day to day of Viking society was carefully woven into Vargsången’s creation, such as “the Great Hall where people gathered for different occasions... Another important building is that of the blacksmith. His job was very  important, for he forged a lot of instruments and tools for daily use as well as parts needed for  shipbuilding and weapons.”

A comprehensive exploration of this region will take you to a mountaintop altar, where one can gather from the bloodstains on the stone that a sacrifice was recently made to the gods. However, don’t let the spooky parts scare you away from visiting. Yes, certain aspects of Viking life were harsh, but there was also pride to be taken in the work of artisans and beauty to be found in the landscape and animals.

The landing area offers visitors both a group joiner for the SL Norse and Viking Society, which regularly meets here, and a landmark giver for Strandhavet Viking Museum.

Come visit Vargsången today to see the world through the eyes of a Viking. 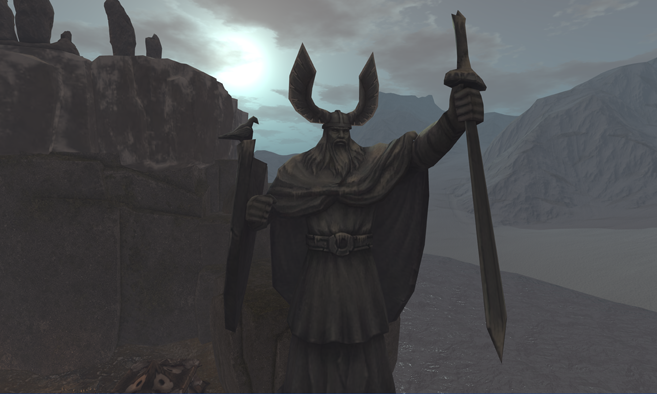 A land in the far North, a long time ago when there were gods and giants, Valkyries, dwarfs, and trolls. A land where the winters were long, dark, and cold and the summers not so warm either but exploding with flowerage for a short period of time. Everyday life was a challenge, sometimes ending way too early. - Viking life in the Early Middle Ages, with a touch of mythology.