This week we are traveling around the globe and through time through the extensive David Rumsey map collection.

David Rumsey, President of Cartography Associates, has been an avid collector of maps since the early 1980s. According to his website, the collection “contains more than 150,000 maps... Items range in date from about 1550 to the present.” The digitization of archival materials has made historical content more accessible, and Rumsey had the keen foresight to create an interactive experience with these maps in Second Life.

Rumsey states, “We built the 4 {regions} in 2008 and have continued to update them since then. One of the things that fascinated me early on was the potential to “walk” on the historic maps and fly around them in SL.” Just getting from map to map feels like an adventure; they vary in size and are not only on display but a central component of the region’s structure. The degree to which atlases inform the design gives the region a dream within a dream feel. Rumsey informs us that “The Yosemite map which forms the floor of the site was built with a full elevation model so that it is accurate and in scale. The map is the first truly accurate map of the Yosemite Valley made by U.S. Army topographers in 1883.”

The video shows a long map of the Tokaido road: Rumsey says that it was made in 1687 and was drawn by hand! “In real life it is a scroll that unrolls to be over 30 feet long. It shows the route from Tokyo (then called Edo) along the coast to Osaka.”

These maps are a visual history of how countries and territories have changed over time.Rumsey’s website even mentions that “close inspection of the {American} maps often reveals the growth and decline of towns, mining excavations, the unfolding of the railroads, and the "discovery" of the American West by European explorers.”

David Rumsey has donated his entire physical map collection to Stanford University, where it is housed at the David Rumsey Map Center in the Stanford Library and open to the public. Visit the virtual collection today to let out your inner navigator! And don’t forget to pin your hometown on the large world map so others can see that Residents from all over have been here. 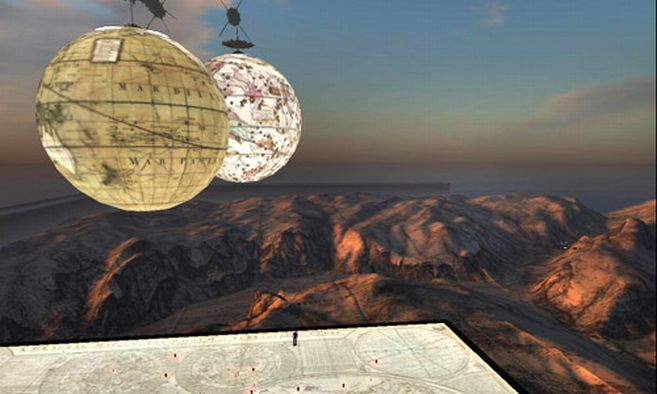 Discover antique maps in a unique, experiential way and explore a 3D recreation of Yosemite in 1883.