This week’s destination is an intriguing and timely recreation of a news studio buzzing with current forecasts in real time as well as a voting booth with instructions for each U.S. state.

The creator is a longtime Second Lifer named Duncan who also works in the political field. (His voice in the video is dubbed by voice actor Reverend Quar for privacy reasons.) Built with data pulled from FiveThirtyEight.com, this region runs a simulation of the 2020 U.S. Presidential election based on the latest state-level forecasts once every ten minutes or so.

A male avatar in a formal suit named Guy Simpleton serves as the host, announcing each state as its corresponding color is filled on the large map behind him, in the manner of the calling of states on election night. Duncan elaborates on the design of the board by saying, “Rather than do a geographic map, I made 1x1x1 cubes for each electoral vote in a state to give voters a better sense of the relative scale of the states as they're called. So Wyoming may be big on the map, but it's tiny in terms of the electoral vote total. The Eastern Seaboard gets really crowded because so many people live there.”

There are also some lighthearted elements to bring a humorous contrast to the table of pundits, such as a nerdy statistician based on Nate Silver (founder of FiveThirtyEight), and a talk show set with some celebrity guests.

This region is a well-rounded snapshot of the current U.S. political climate: protests on both sides taking place, a courthouse, as well as a voting booth outside of a post office scripted to outline local U.S. voting procedures.

Duncan has recently experienced some health issues that have prevented him from being as physically involved with this election as he would prefer, so he created the election simulator in an effort to present the facts in an impartial way so that people can make the decision they feel is right for them. “I see voting as a matter of thinking locally,” Duncan says, “building community and institutions that can be trusted."

Whether you’re there for a couple hours or 10 minutes, alone or with politically engaged folks from the U.S. and beyond, you will definitely leave with something to talk about. Visit the Election Simulator today! 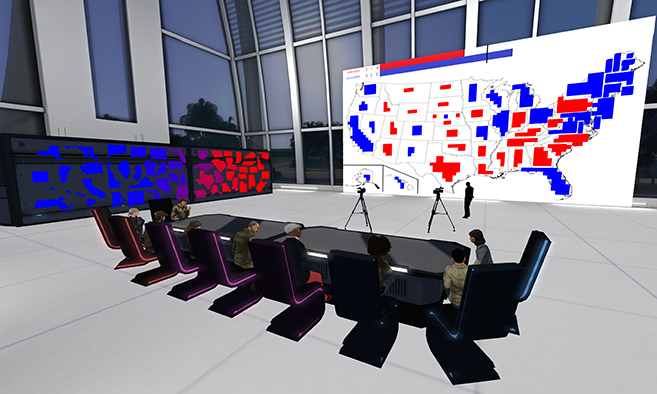 Do you need to prepare yourself - mentally, spiritually, physically - for the tension of Election Night 2020? These randomized election simulations between Trump and Biden are based on the best available forecasts and set in a mock TV news studio.