On Wednesdays from 5:00-7:00pm SLT throughout April and May, there will be guided tours of the Tucker Stilley exhibit on Virtual Ability’s Cape Able Island.

Tucker Stilley is a multimedia artist who was diagnosed with ALS/MND (Lou Gehrig’s Disease) 20 years ago. Now fully paralyzed, he uses his eyes to control his computer and create art at a dizzying pace. Creativity runs in the family; his sister, Kate Stilley Steiner, is a documentary filmmaker and co-founder of Citizen Film. Kate and Tucker created a non-profit called the Cohort of Disembodied Artists as a way to help other artists who use assistive technologies to build a community to support their artwork.

The sibling duo has teamed up with Virtual Ability, an institution of the Second Life community, to present a virtual exhibit of Tucker’s work. Virtual Ability was founded by Gentle Heron in 2007 and has grown into a huge and vibrant community. They describe their vision as “to be the leading provider of services and information for people with disabilities in online virtual worlds.”

Tucker’s bio, available in full at the exhibit, describes him as “born in Santa Ana, California in 1961, and educated in an eclectic patchwork stretching across North America – Stilley is a child of the Space Age – with all the bizarre baggage that entails.” As a ‘distinguished alumni’ of the Massachusetts College of Art and Design, he has worked as a media artist, sound designer and film editor over the years as technology has impacted the way we create and experience art. His work has received numerous accolades, with the LA Times describing it as “breathtaking images of the frailty and strength of the human condition.”

Sign up today to attend a guided tour of ‘Palimpsessed,’ Tucker’s new exhibit, curated by Treasure Ballinger. It is available to the public and is sure to give all who attend a bit of much needed inspiration. 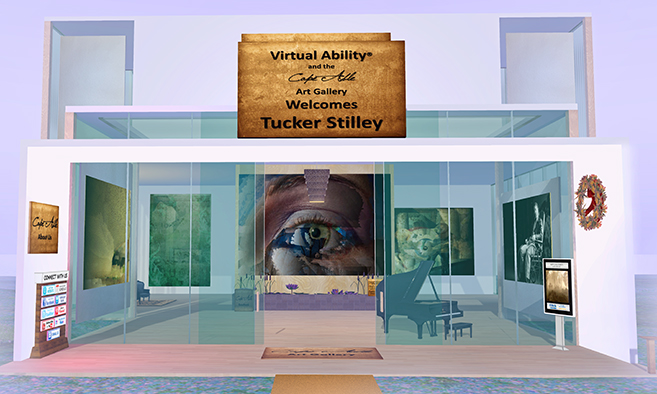 The Cape Able Art Gallery is a beautiful, eclectic gallery hosting art exhibits by deaf and/or disabled artists. Exhibits change quarterly. Artists can be contacted privately for the sale of their works. Cape Able is a nonprofit, Virtual Ability Inc. owned region.