Take a stroll through Le Jardin Des Tuileries, a virtual garden inspired by the Tuileries Garden located between the Louvre and the Place de la Concorde in Paris. While there, you may want to grab a selfie with the Eiffel Tower for our Famous Landmarks Challenge.

Owner of the Made in Paris region, Morganeparis Parx, is influenced by Paris architecture when creating his place and would love it if Residents found it beautiful enough to make them want to take pictures there.

A Resident since 2008, Morgane shares what Second Life means to him:
“What does Second Life mean to me? A lot! I was born in SL in June, 2008 so I've been on Second Life for 14 years now. If it were boring here, believe me, I wouldn't have stayed.

When I discovered SL, I was playing  “The Sims” game all day, and I didn’t go outside my home a lot. My therapist told me that he heard about Second Life. He didn’t test it, but told me that maybe I could build a house like in The Sims, and create characters, but I’ll be able to have interactions with other people.

I decided to test Second Life and after learning about moving my avatar and camera, and watching Torley Linden’s videos, I quickly found an area where I was allowed to build. After a while, people in the sandboxes started to talk to me.

Month after month, I  improved my skills in Photoshop, started to learn Blender, I improved my English, and now I have relationships with people again.

Second Life helped me in so many ways. Being immersed in the world keeps me healthy and allows me to have social interaction with a lot less stress than IRL.

SL changed me a lot, for the better, it helped me to interact with people again, and allowed me to regain my self-confidence, and to develop relationships.

While exploring the region, you may want to grab a bear and take an image similar to those in the "Bears Around The World" contest, which encourages Residents to travel more. Creator Gabryel Lamplight, who held this contest this past summer, shares more about it, “This is a collection of cute bears combined with a photo contest. The bear is for many a symbol of childhood, a period during which everything seems possible. On SL, it seems to me that we come to find a part of this magic or carelessness. That's why through this contest we invite people to travel on SL and bring back beautiful photos with their favorite bears. Although the  contest is now closed, an exhibition will be organized at the Puerto Banana destination during the fall of 2022. The bear collection will still be available after the contest in the B.GAB store.” 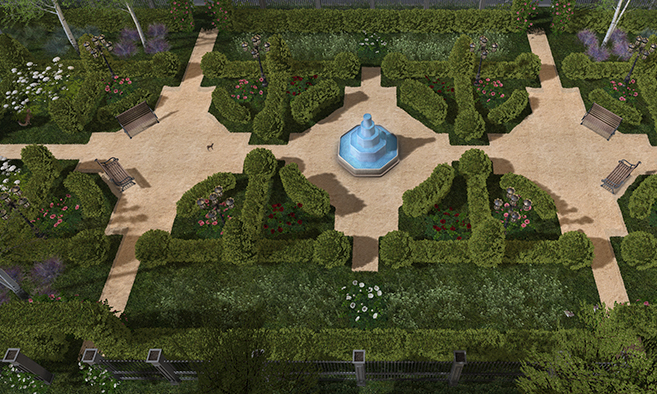 Welcome to "Le Jardin des Tuileriess" a realistic French garden located on the "Made in Paris" region. It is inspired by an authentic French garden you can find in Paris. Enjoy the lush greenery and the romantic atmosphere with a beautiful view of the Eiffel Tower. Don't forget to capture your memories with snapshots and add them to the Made in paris Flickr group: flickr.com/groups/made-in-paris