Christopher Street in Second Life is a safe place for the LGBTQ+ community to come together, connect, and be themselves.

In June of 1969, in a part of NYC known as the West Village, police officers raided one of the most popular gay bars on Christopher Street named the Stonewall Inn. They began beating members of the transgender community, which led to a backlash from those who were present and fed up with what had been happening for years. That was the beginning of the Stonewall Riots that started on Christopher Street and continued all over the Village area of NYC for the next few days. They are the reason you can call yourself Gay, Lesbian, Bisexual, Pansexual, Trangender, Non-Binary, Queer and anything else you prefer to identify with, without being arrested for doing so.

The virtual Christopher Street in Second Life is inspired by these events. It is a place of love where Residents can feel safe and learn about each other and explore their sexuality and gender with people like themselves, who care and understand.

Tabitha Littlepaws, the owner of Christopher Street, gave the streets similar names as those from the neighborhood in Greenwich Village. She tells us why she chose this place, “not just because this was where the LGBT movement was said to have begun, but because we want to show the people of Second Life that we too can rise above the hate and start a community of individuals that believe in similar ideals.

What Tabitha offers the community is a place to call home. She says, “There are very few if any communities in SL that provide basic housing for free. There are very few if any communities that will provide a new creator the chance to have a storefront to display their talents for free. We want to give everyone a chance to be part of a community no matter what their financial status might be. We only ask our residents and shop owners for a donation that they can afford, whether this is $1L or many more, we do not log or let other residents know how much anyone gives to our community.”

Tabitha’s partner, Penny Cobalt, lives in a part of the world where the LGBTQ community faces a lot of hate and she can only be safe as long as she keeps a low profile. Penny owns a LGBTQ dating site in Second Life, Love Me Tender, that is located in Christopher Street.

Find your home at Christopher Street where diversity is welcomed with open arms and no judgment exists! 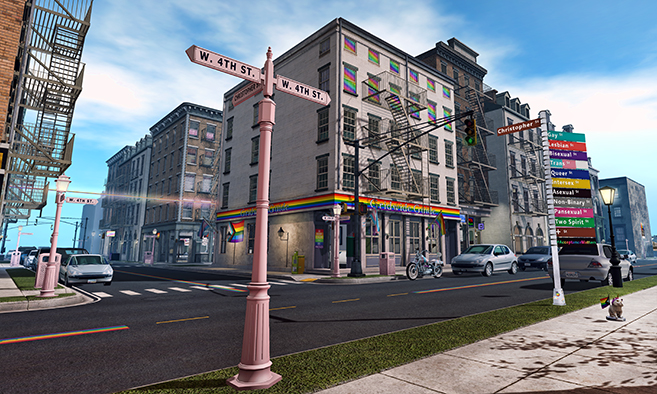 Christopher Street is a friendly place to meet like-minded people. A great place to call home, it has free apartments and free storefronts, inquire within! It is a safe place for the LGBTQ+ Community to come together, connect, and be themselves.