Our “Made in Second Life” series continues with artist JudiLynn India, an abstract painter in the physical world who has combined her love of art with Second Life. The latter has helped her be more productive as she has fully embraced the identity of digital artist and virtual gallery owner in the Metaverse to her resume.

Trained in graphic design and drawing at the Tyler School of Art, JudiLynn puts her creativity to work on paintings that are both created in ways traditional as well as digital; using brush and paint in the physical world, combining vivid colors with earthy tones, she imports high quality images into SL. JudiLynn does not seem to be afraid - as some in the art world are - to use digital technology to manipulate some images that nonetheless originate in the “brick and mortar” realm to create visceral art that feels both alive and serene.

She tells us, “Though school assignments focused on realism, I later found myself drawn to intuitive painting as I find it more interesting to create what my spirit dictates than try to reproduce the real world.” Her interest in abstract painting peaked when she saw a senior art student throwing paint at a canvas and found it to be empowering.

In 2009, when she discovered Second Life through a magazine article, her exploration of digital art began. Since then, she has been sharing her digital illustrations and traditional paintings while building relationships within the Second Life art community. “I was set up in a small storefront where I was discovered by 3D sculptor Binary Quandry and introduced to the Life Stream Gallery. I soon met many other painters and visual artists from around the globe,” she shares. “I was offered land, by Luchenpur Darwin, to build a gallery at Center Ground region and have been there since 2012.”

Creativity runs in the family as JudiLynn’s father, John Staples, was a prolific oil painter and graphic artist himself. And JudiLynn reveals this about her mother: “After viewing the theater debut of TRON in 1982, she called me to say that she could see me combining artwork with computers some day. Mom was clairvoyant.”

At the Center Ground Gallery of Art you can see digital copies of JudiLynn’s abstract art on the walls, and socialize with other art aficionados at the Alpha Jazz Cafe. Prints of some of her physical world abstract art can be found at judilynnart.com.

Jump into creating your own virtual abstract art with “The Splasher” available for free on the SL marketplace, created by veteran Second Life content creator Arduen Schwartzman who helped envision JudiLynn’s story about her art school days - as seen in the video - with his generous creation.


Art by others seen in the video inside JudiLynn’s Second Life home: 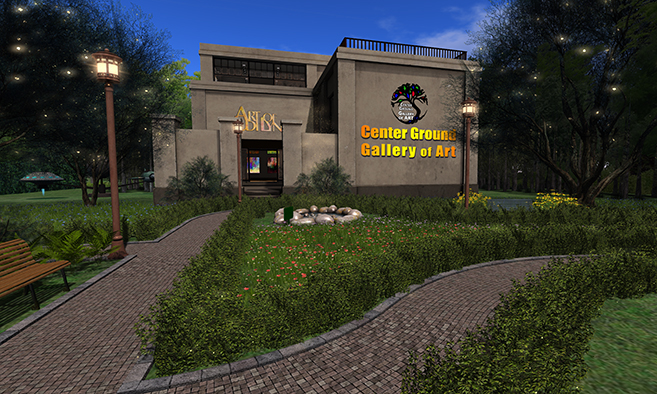 The Center Ground Gallery of Art presents the artwork of Real Life artist Judilynn India. Owned and curated by JudiLynn India, they occasionally host the work of other great RL painters. Feel free to browse the gallery and relax in the gallery gardens where you'll also find space to dance or bike ride through the Center Ground region.