This week we would like to bring attention to the Transgender Resource Center, a place of community and support in Second Life.

The TRC is of particular importance to Shilo Ravenhurst (she/her, they/them), who has been in SL since around 2007. About a decade ago Shilo decided to change to a female avatar, and found it to be empowering and freeing.

While Shilo is realistic about the aggression that trans people often face, she speaks highly of the safety that LGBTQ+ people can find in SL: “It’s an open world where you’re free to be who you want to be, to be you as you want to be seen and addressed.”

The TRC holds meetings twice a week for trans and gender non-conforming individuals. The meetings on Thursdays (7PM SLT) are called “Topic Night,” where they discuss the news and current events. Cisgender allies are welcome to join this meeting and show their support. For those who are not familiar with this community, the term cisgender refers to people who identify as the gender assigned to them at birth.

Shilo tells us that the Sunday meetings (11AM SLT) are “more akin to what your typical transgender meeting in real life would be, like a support group. We talk about our week, about who we are, and introduce ourselves to people if they’re new. It is typically closed to cisgender people because of the sensitive topics and such.” Safe spaces are important for many reasons, and there is a special comfort in being around people who also experience the specific challenges of certain marginalized communities.

Shilo loves changing outfits and has many avatars, although the one featured in today’s video is her main avatar. Shilo says that “when you can’t present as yourself in real life, then it’s a lot easier to be who you want to be inside of this virtual world.”

There are many support groups in SL, and we want to remind you that in SL you are never alone. Shilo says of her experiences inworld, “Second Life has done a lot for me. It’s where I met my partner, it’s where I met many lifelong friends. I think it’s a great place to socialize and explore with other people.” 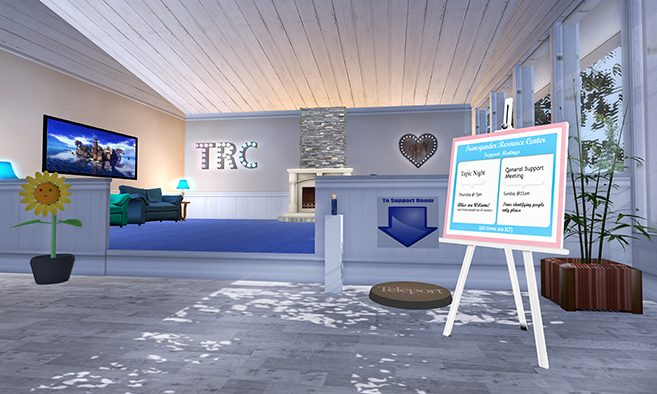 The TRC is a safe place for Transgender people and their allies to join and talk about the issues they face. Weekly Support Groups are available.