Are you missing nights out at the movies with your friends? In Second Life, you can now watch and enjoy films together in an all-new virtual cinema featuring short cartoons from independent animation studio Titmouse.

For the next month, you can watch an exclusive showing of its annual “5 Second Animation” shorts program within a massive cinema space in Second Life. The 90-minute production consists of dozens of edgy short animations produced by the talented Titmouse team.

Titmouse is known as the Emmy Award-winning maker of many of today’s most popular animated shows available across a wide number of cable and streaming outlets including “Big Mouth” on Netflix, “Star Trek: Lower Decks” on Paramount +, Adult Swim’s “Metalocalypse,” and  “Star Wars: Galaxy of Adventures” on DisneyXD.

Several Hollywood industry insiders attended an April 23rd premiere screening of the show, which will continue to screen to the general public through May 24.

Check it out for a limited time in Second Life!

Fans of Titmouse and independent animation won’t want to miss our exclusive Q&A with Titmouse CEO Chris Prynoski, held this Friday, April 30 at 9am SLT on “Lab Gab”! Here’s your chance to ask questions and interact with the Titmouse co-founder during this special live event.

Check it out today! 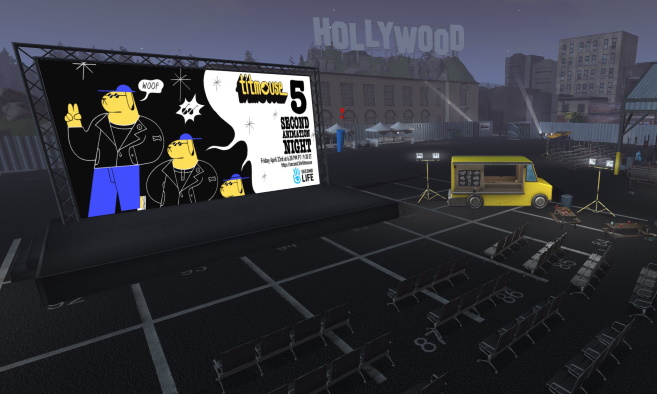 Visit the official event space for independent animation studio Titmouse (creator of "Big Mouth," "Star Trek: Lower Decks," and many more popular shows). Watch an exclusive showing of the "5 Second Day" animations in a virtual cinema and take out your frustrations in the smash cage. Don't forget to grab your free swag, too!