After The Fall is a mysterious urban wreckage great for group roleplay or a solo adventure.

Creator Tigerlily Hyun opened this region in 2013, so considerable evolution has taken place. For example, Tigerlily says that “while I started the sim with roleplay in mind, that has really fallen by the wayside, and it's more for exploring and hanging out now.”

The derelict storefronts and broken roads tell the narrative of a strange and catastrophic event. The amount of detail provided by the environment provides the opportunity for Residents to have a common starting point and then create their own story with the space. What happened here, and is there anyone left?

Tigerlily tells us “I decided to add solo quests to ATF, so even if you didn't have a group or were just exploring SL, you could come here and have a bit of gaming fun yourself.” The versatility of After The Fall makes it a great spot to check out any time of the day.

Tigerlily, having been inspired by the story potential of After The Fall, has actually created a digital graphic novel available on YouTube. Additionally, Tigerlily is developing a sci-fi novel series: “The story follows the perspectives of six characters from various walks of life as they struggle to overcome fear, separation, and loss during the aftermath of a meteor storm and subsequent alien invasion.”

Fun Fact: The green bug eyed monster avatar depicted in the video was custom made by request of Sci-Fi writer legend Joe Haldeman as seen on the Second Life Book Club. The avatar is available from The Silas Merlin Gallery on Marketplace.

Visit After The Fall today or plan a group outing. Don't forget to bring a flashlight! 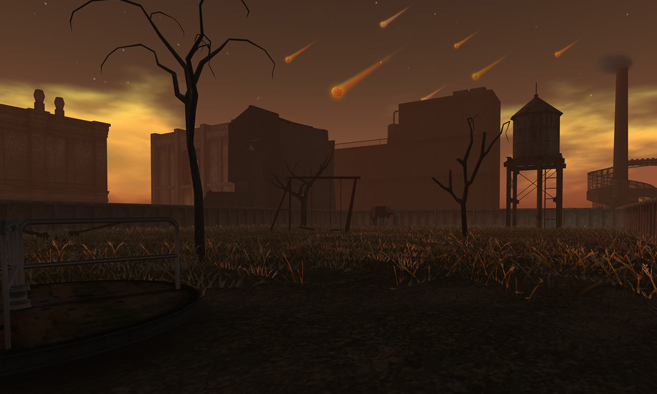 On the verge of economic collapse, with the world in a very vulnerable place, astronomers predicted frequent and disastrous meteor showers. But they couldn’t predict what came next... Dark and gibbering creatures emerged from the impact craters, decimating everything in their sight. As a human, how will you survive? As an alien, what’s your next move? After the Fall has an elaborate interactive grungy urban city, with apocalyptic-themed role play.