Take a trip to Kawaii City, a cyberpunk metropolis where you can gaze at skyscrapers while relaxing at the cafe.

Builder and owner of Kawaii City, Naru Darkwatch, shares her inspiration for this photogenic destination:

“Somebody asked me what inspired me to build Kawaii City. To answer that question, I must explain some of the background I have had in my Second Life journey.

I joined this fantastic world because of the roleplaying environment and the freedom it gave you to create a character almost 100%, just as you want it to be. But as Real Life took more and more of my time, I came to SL more for the friends, music, and to relax with a little building; it started with Kawaii Café so we could all have coffee in the mornings before work and not get yelled at by a GM because we were not all in character.

Little by little, a city began to take form as more land became available to buy. The cafe and city have always been open to the public as I wanted to make a home for those who did not have a place to go, where you could be who you wanted to be but still be in a cyberpunk environment and not be forced to roleplay all the time.

Eventually, it took some convincing from friends to list it in the destination guide as I’m quite critical of my creations, but many said I should, so now it’s there.

Many have asked if I will open it up for RP, but my goal for the city is to keep on building it, improving it, and not to set up rules on who can visit and what to do there.”

If you’re looking for a cyberpunk destination to explore without roleplay requirements and other restrictions, teleport over to Kawaii City now. 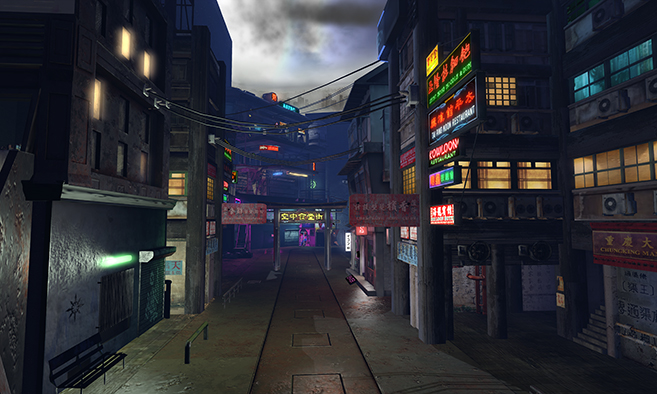 A photogenic cyberpunk/dystopic city to walk around, eat some Asian food, have some delicious coffee, explore the bars and clubs or find a place with that special somebody and snuggle a little.