Enjoy the peace and tranquility of Big Sky Over Florence and you may discover pathways to your inner self.

Designed by Ines Shelby and Elvira Kytori, Big Sky Over Florence is peaceful, imaginative, and serene in its simplicity.

Owner of the destination, Gnaaah Xeltentat, tells us what his inspiration for Big Sky is:

“I love traveling and more so being near water. I love that feeling you get when your entire view is filled with sky and water. Just being in awe of the magnitude of something so simple as a vast expanse of sky and the movement of the sea. I wanted that feel at Big Sky and I hoped that would be the primary sense you felt when you teleported in. I wanted to keep it “simple” with places to sit and enjoy the views, so people would feel they are “beside the ocean” and remember the times spent by it.

I’m Canadian RL so I think the destination is a combination of the Muskoka Lakes in Ontario and the east coast of New Brunswick/Nova Scotia. Less defined by a specific place and more so by the feel those places evoke.”

He enjoys hearing about what visitors think of Big Sky and loves seeing the images that are submitted to the Big Sky Flickr group.

Gnaaah also shares how Second Life is the perfect escape for him and why he’s still here 14 years later:

“One of my favorite things about Second Life is the sharing of ideas and the imagination that goes into building someplace special. I look at other creators/builders and I am constantly amazed at the creativity involved in all the work they do. In some regards, it’s almost magical.

I logged onto SL 14 years ago for the first time (after seeing a news item about it on television). I thought I’d only be in the game for a day or so and so I picked the goofiest name I could think of at that particular moment. Little did I suspect that over a decade later “Gnaaah” would still be flying into walls and getting stuck in trees.

And 14 years later, SL still provides a welcome respite from a sometimes crazy and definitely busy RL. Especially these past two years. After being in “lockdown” the ability to delve into a “second life” and escape the restraints of being stuck at home with limited social connections has been a godsend.

Friends in game made the “real” world a much less scary place. I’m thankful for being able to log on and escape for a little bit.“

The first day of Autumn is on September 22nd, so take some time to enjoy the last days of summer at white sandy beaches in Big Sky Over Florence. 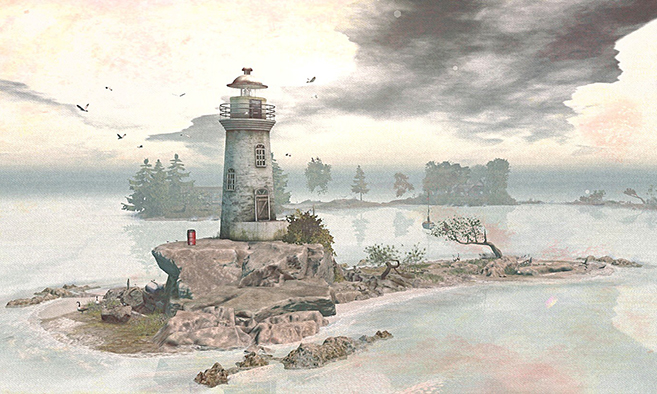 Enjoy the last days of summer at Big Sky Over Florence. Listen to the calming ocean sounds and relax on the white sand beaches. Hang with friends in any of the island houses or try your hand at some photography. There are plenty of pretty views. Simply enjoy the peace and tranquility of this lovely spot and unwind. Everyone is welcome! Add your images to their Flickr group: flickr.com/groups/florenceatlowtide